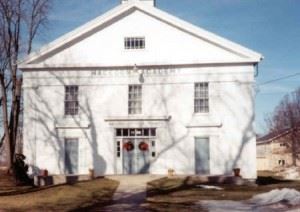 The town of Macedon was created from the town of Palmyra on January 29, 1823. Macedon has an area just over 23,000 acres with a gently rolling, irregular surface. It is located in the extreme southwest corner of Wayne County.

Macedon's first settlers, Webb and Hannah Harwood, arrived in what is now Macedon in the late spring of 1789, after a forty-six day journey from Adams, Massachusetts in an uncovered wagon drawn by a team of oxen.

The Erie Canal was an important factor in the settlement and growth of Macedon. Its two ports on the canal were Wayneport, formerly called West Macedon, and the village of Macedon itself. Today, Lock Number 30 of the Barge Canal System is located just off Route 350. Here visitors can view an operating lock.

Education was important to the early residents of Macedon. The Macedon Academy was well known throughout the area for its exemplary standard of higher education. Founded in 1841, the Academy was designed as an intermediate level of education, between the district school and college. The Academy adhered to very strict doctrines, and for more than fifty years had a great influence in guiding the morals and the higher education of young men and women in the area.