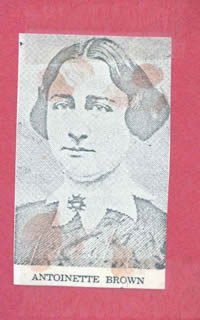 In 1847, a worried father wrote to his daughter, who was about to graduate from Oberlin College, "Your mother and I are shocked by your boldness and lack of wisdom. I just can't believe this thing. Your mother is prostrate. I am doing you a kindness in refusing to help you carry out a plan that can only bring you unhappiness and disgrace." The daughter who had upset her parents was Antoinette Brown and the "thing" her mother and father were so shocked at was her desire to become a minister. It wasn't that her parents were opposed to religion, as Mr. Brown had once been a theological student himself. It was just so completely unheard of in that day and age for a woman to enter any profession that her parents couldn't conceive of such a wild plan. Even the professors at Oberlin Theological Seminary called the idea of a woman minister 'reckless, blasphemous and lacking in Christian precepts'.

But Antoinette Brown persisted in her dream even though deserted by her parents and many of her friends. She worked and saved and studied until she graduated in 1850 from Oberlin Seminary after three years of poverty, ridicule and discrimination because of her sex. Although she graduated, she was refused a license to preach. Antoinette then turned to social reform and speaking tours in the cause of Women's Rights.

As she traveled, she met many of the leading thinkers and reformers of that age - Susan B. Anthony, Amelia Bloomer, William Lloyd Garrison, Henry Ward Beecher, Thoreau and many others. She became an accomplished speaker, and one in great demand. On July 4, 1853, she was the first woman ever to give an Independence Day address - at South Butler in Wayne County. The Congregational Church there called upon her to be their pastor and on

September 15, 1853, she became the first woman in the United States to be ordained a minister. Antoinette Brown served the members of the Congregational Church of South Butler until June 1854.

At the age of thirty, she married Samuel Blackwell, brother of Elizabeth Blackwell who was the first woman to graduate from medical school, in Geneva, New York. Antoinette had five daughters, carried on a busy schedule of lectures, wrote ten books, in addition to poems, essays and hundreds of articles. Oberlin College awarded her two honorary degrees. She preached her last sermon when she was ninety and died in her ninety-seventh year - a loved, honored and respected pioneer in women's rights who made history in South Butler.